Heskins Microprismatic Tape, a highly-reflective tape with up to 5 years of retro-reflective performance, returning up to 80% of light back to the source for increased safety and visibility.

Heskins Microprismatic Tape, commonly referred to as EGP reflective tape, is highly-reflective, returning up to 80% of light back to the source. The tape performs much longer than standard reflectors, with a retro-reflective performance of up to 5 years.

The tape surface is covered in micro-engineered 3 point prisms that return light in a concentrated cone, increasing safety and ensuring visibility. Apply on any smooth, clean, dry flat surface such as:

See the Heskins range of accessories for additional help during application, pro-longing the life of anti-slip tapes and line markings. The range consists of primers, edge fixing, mallets, rollers etc.

The American Association of State Highway Transportation Officials (AASHTO) has recognized that some retroreflective films are rotationally (orientation) sensitive. Because this impacts sign luminance AASHTO has defined a specification to measure orientation performance. Figure C shows how the orientation sensitivity is measured. For a film to be considered rotationally insensitive, the average percent difference (shown in Figure C) must be less than or equal to 20%

When measured for orientation sensitivity as described in AASHTO M 268-10, all Heskins LLC sheeting, both beaded and prismatic, pass the specification as rationally insensitive. Therefore, no special identification marks or other features (such as a datum mark, or distinctive seal pattern) are required to denote optimum orientation for sheeting. Because the user can expect visual uniformity regardless of orientation, no costly and cumbersome fabrication techniques are required to orient sheets, cut sign legend or border tape during sign fabrication.

Specifying agencies and sign fabricators are cautioned that some retroflective sheetings, even of the same ASTM ‘’Type’’ may not provide consistent luminance for desired night visibility if the sheeting is not applied in the optimal, or in uniform orientation. Agencies and fabricators should be aware of this concern and discuss the potential effects of rotation on luminance of specific sheetings with their material supplier before beginning installation and/or fabrication.

It is your responsibility to read the Product Data Sheets (available below) before you place an order and prior to application of the product. The content of this website is our best recommendation and is not advice. Coverage rates quoted are approximate, you agree that coverage depends on the condition of the substrate, surface absorption, texture and application method. We ALWAYS recommend a trial area is coated to ensure the product meets your requirements before use.

Send us your question

Be the first to ask a question about this product! 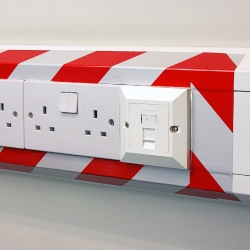 Heskins Reflective Tape is a high-visibility tape for marking out hazardous areas, or for guiding personnel through areas, such as to emergency exits. Useful for marking and highlighting the edges of steps, ledges, stairways, and low-hanging objects. Self-adhesive backing - quick and easy to install Available on 10m rolls with widths from... 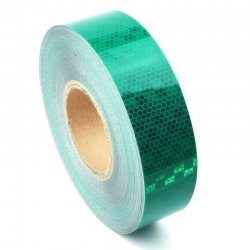 Heskins Microprismatic Tape, a highly-reflective tape with up to 5 years of retro-reflective performance, returning up to 80% of light back to the source for increased safety and visibility. Commonly referred to as EGP reflective tape Applies to any smooth, clean, dry flat surface Use on static objects like posts and barricades,...